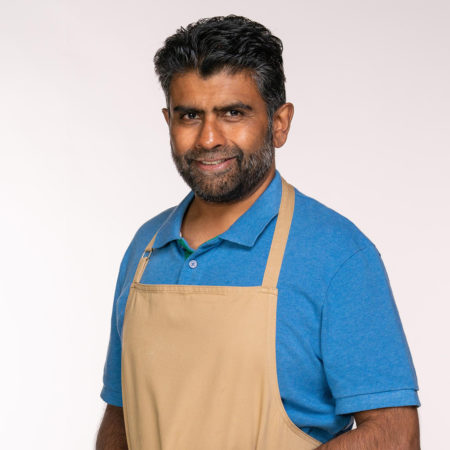 Self-taught baker Makbul first took on cooking at home as a means to help support his mum. He has honed those early skills through watching TV shows, reading books and drawing inspiration from famous chefs. He has a remarkable ability to measure out ingredients just by eye. Mak’s strengths lie in pastry (he says he’s better at puff than shortcrust) and, for celebrations such as Eid, he enjoys making traditional Asian nankhatai biscuits. He thinks baking has made him generally more patient, but woe betide anyone (even his wife) who tries to take control in his kitchen! Their three grown-up children are his harshest baking critics. Mak has recently taken up beekeeping – he produces his own honey, which he loves to use as often as possible in his bakes.