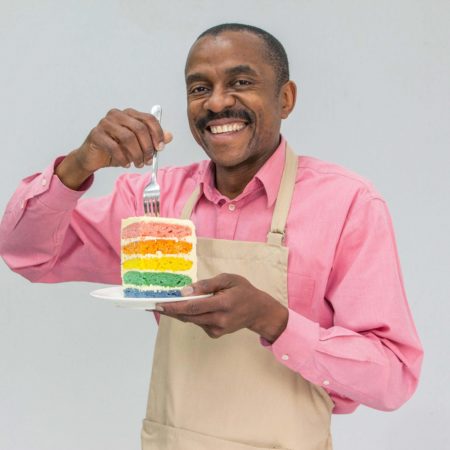 IT Programme Manager, Peter, lives in Essex, with his wife Tito and two children Temi & Toni. Born in Brixton, South London, Peter moved to Nigeria with his parents when he was seven years old. There, he continued his education and eventually moved back to the UK when he was 24. Peter started baking eight years ago after feeling unwell, which he put down to eating shop bought bread. He started making his own and has never looked back. Peter prides himself on making the picture perfect macaron based on a Pierre Hermes recipe. Health conscious Peter has a variety of hobbies such as running on the beach, badminton, spinning, chess and science.

Peter confessed his love for coconut early on in the series. If you love the tropics as much as he does, have a crack at his coconut Fruity Cake.