Dan and the Giant Peach: a poem 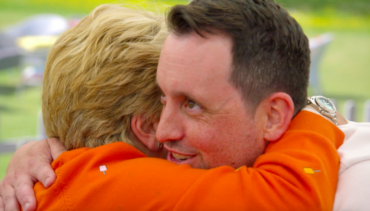 Dan had Star Baker firmly in his sights from the off. First up,  he sweetened the judges’ taste buds with a cocktail-inspired Florida Roulade, which earned him not only a Hollywood Handshake, but a Sandi Snuggle to boot. After the roulade, Dan was on a roll, producing a perfectly wobbly pudding — which, in blancmange world, is ideal! Finally, he sealed the deal with his ‘James and the Giant Peach’ Showstopper — a melting chocolate sphere that was out-of-this-world delicious.

To celebrate, we’ve taken a leaf out of Dan’s (daughter’s) storybook, writing him this James and the Giant Peach inspired ditty.

Are you sitting comfortably? Then we’ll begin.

Dan and the Giant Peach

For his show-stopping creation

When his eye fell on a book

In his daughter’s reading nook

“James and the Giant Peach…

What dizzy heights with this I’ll reach!”

He grabbed some choc to have a go

But his peach began to grow and grow

As big as a cat, then a rhinoceros

Until as big as his house, it was

A door opened in its side

So Dan walked in, all wide-eyed

Suddenly he heard a rumble

The peach began to roll and tumble

Over field and glen it went

Until it bumped into a tent

He climbed out to see Noel and Sandi

He offered them some peachy candy

Then into the tent he strolled 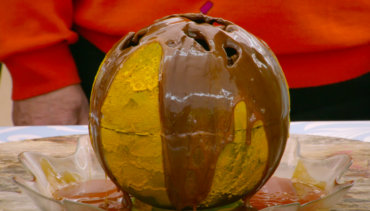 The Great British Bake Off will be served up on your TV screen every Tuesday evening at 8pm on Channel 4. If you missed out or are hungry for second servings, head over to All 4 and catch up.