In a flurry of tears over tiers, rising tempers over tempered chocolate, and bakers going cray over tray bakes, Cake Week left us with lots to digest. But through all the drama, the moment that will stay with us the longest is having to bid bakewell to Luke, who became the second baker to leave the tent. We cornered him for one last cup of tea to talk about his time on the show. 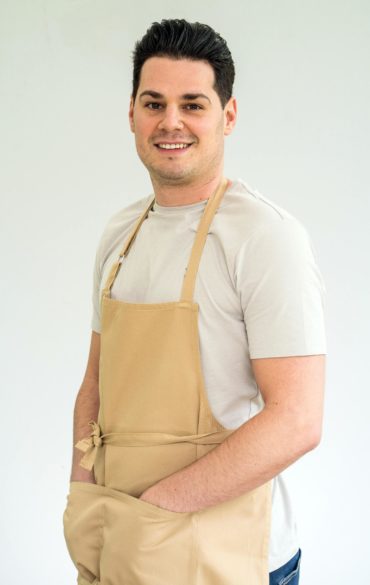 “Even though it was just two weeks, it was an amazing two weeks. I was absolutely gutted that I didn’t get to Bread Week, as I feel that is one of my baking strengths. My fiancée always asks me to make her my bread pinwheel of goats cheese, pesto, olives and sundried tomatoes. I was absolutely devastated to leave, there is no getting away from that, but on reflection, it was one of the best experiences of my life, and I have made 11 new friends as well!

“I am from Sheffield and have lived here all my life. It’s got to be one of the most friendly cities in the UK.  My nan and mum are so proud of me, and last week my mum at work got asked for my autograph. My dad was dead excited when he heard I was going on the show. They have been a great support.

“Being a house and techno DJ is a second passion of mine, after baking. At work I have to be serious and professional, but I know that come Friday night I will be able to let my hair down and DJ. It’s a fantastic feeling when you play a good song and literally everyone is dancing.

“My best moment in the tent was definitely when I got through week one. What a relief! But it all started to go wrong from the Signature Challenge when the judges said my sponge was tough as old boots. Then I had to start my Technical all over again, and by the Showstopper, I was nearly in tears! When Sandi asked me if I wanted to bring up my Showstopper, I said ‘not really.’

“With hindsight, I should have just kept to one design for my Showstopper, it would have been safer. Instead, I kept changing the design so I didn’t got to practice it as much as I wanted to. It looked lovely when I put it into the fridge, but when I took it out it was like the leaning tower of Pisa. I started to slide as well; that knocked my confidence and I didn’t recover after that. 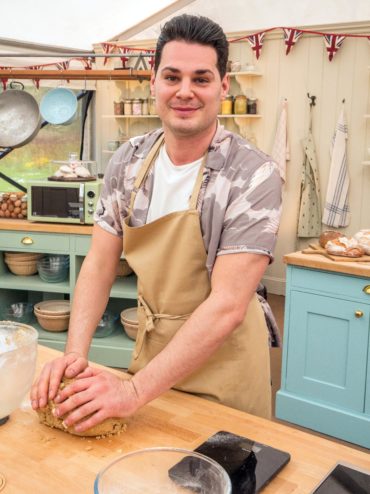 “I think the judges’ comments were fair and I feel I have learned a lot from them. Every time I got their feedback I took it on board and I’ll use it when I continue baking at home. Being on the show has made me experiment with new flavours and new bakes.

“I will be watching each week with my dogs Oscar, Daisy and Ruby… and of course my fiancée Kelly. We’re getting married next year on the Amalfi coast, and all our friends and family are coming out. I’m hoping to get some of the Bakers out there too!

“I’m really going to miss everybody, but I just can’t believe I even made it onto the show in the first place. Just little old me who bakes in his kitchen, started with his nan, and taught himself. But, hey! I was still on Bake Off, I still went into the tent, I still had Paul and Prue try food I’ve baked – which is literally a dream of mine. I always wanted to go on the show to have a go at baking in the tent, and I had the best two weeks of my life”.

Luke will join Jo Brand on The Great British Bake Off: An Extra Slice on Friday 7th September at 8pm on Channel 4.