This impressive layer cake is as delicious as it is beautiful. Make the jelly bowl, cake and mousse-cake layers the day before you plan to serve to allow plenty of time for everything to set. The jelly and mousse layers use gelatine, but if you prefer you can use agar agar, which is veggie-friendly.

For the clear jelly:

For the kirsch syrup:

For the chocolate mousse:

For the raspberry mousse:

For the mousse top glaze:

For the coloured jelly:

Step 1
Prepare the jelly (this will take longer than anything else to set). Pour 250ml water into a medium bowl, sprinkle the gelatine into the water and set aside to bloom for 2–3 minutes. Pour a further 250ml water into a pan, add the sugar and heat until hot but not boiling, stirring all the while to dissolve the sugar. Slide the pan off the heat, add the gelatine mixture and mix until completely melted. Add the raspberry flavouring and a further 500ml cold water and mix well to combine. Pour into a medium Pyrex bowl and place in the fridge to set for at least 5 hours, but preferably overnight.

Step 3
Make the sponge. Whisk the eggs and sugar in a stand mixer for about 3 minutes until pale, trebled in volume and the mixture holds a firm ribbon trail.

Step 4
Sift the flour and salt into the bowl and fold it in, then gently fold in the melted butter. Pour the mixture into the prepared springform tin and bake for 15 minutes, until risen and golden. Leave to cool, then using the ring mould as a guide cut out a 20cm disc.

Step 5
While the cake is baking, prepare the syrup. In a small pan combine the sugar with 100ml water, bring to the boil and cook until the syrup reaches 110°C/230°F on the sugar thermometer. Remove from the heat, add the kirsch and leave to cool.

Step 6
Place the 20cm ring mould on a lined baking tray and line the inside of the ring with an acetate strip. Place the cake layer into the bottom of the ring, brush liberally with kirsch syrup and set aside while you prepare the chocolate mousse.

Step 7
Soak the gelatine leaf in a bowl of cold water for 5 minutes, until soft and floppy. Melt the chocolate in a heatproof bowl set over a pan of simmering water, stir until smooth, then remove from the heat and cool slightly. In a small pan, heat 50ml of the cream with the sugar until hot but not boiling, then remove from the heat, add the drained gelatine leaf and stir gently to melt. Leave to cool slightly, then combine with the melted chocolate.

Step 8
In another bowl whisk the remaining cream until it will hold soft peaks and fold it into the chocolate mixture. Spoon the mousse over the soaked sponge in an even layer and chill for about 1 hour, or until set.

Step 9
Meanwhile prepare the raspberry mousse. Combine the raspberries, sugar and lemon juice in a medium pan and cook over a low–medium heat for 3–4 minutes, stirring frequently until soft. Push the berries through a sieve, discard the pips and leave the pulp to cool. Weigh out 175g for the mousse and save any leftover for use another time.

Step 10
Soak the gelatine in bowl of cold water for 5 minutes, until soft and floppy. Spoon 2 tablespoons of raspberry purée into a small pan or jug and heat either over a low heat or in the microwave, until hot but not boiling. Add the drained gelatine leaf and whisk until melted. Add the remaining raspberry purée and stir to combine. Whisk the cream to soft peaks, and fold in the raspberry mixture until combined. Spoon the raspberry mousse over the set chocolate mousse and chill for about 2 hours, or until set.

Step 11
For the cream layer, soak the gelatine in bowl of cold water for 5 minutes, until soft and floppy. Heat the cream in a small pan with the caster sugar and vanilla paste until hot but not boiling. Add the drained gelatine leaf and whisk to combine and melt the gelatine. Leave to cool slightly, then pour the cream mixture over the raspberry mousse layer and chill again for a further 1 hour, until set.

Step 12
Make the coloured jelly. Pour 65ml of cold water into a small bowl and sprinkle over the gelatine. Leave to soak for 2 minutes. In a small pan combine the condensed milk, whole milk and vanilla and heat until hot but not boiling. Remove from the heat, add the bloomed gelatine and mix to combine and to melt the gelatine.

Step 13
Divide the jelly liquid between 3 small bowls and use the food-colouring pastes to colour one bowl red, one black and one green. Leave to cool slightly. The coloured jelly should be liquid but not hot – you may need a bowl of hot water to sit the bowls in if they start to set. Remove your large bowl of set clear jelly from the fridge and have your syringe sets ready – you will need 3 different needles to make a poppy – a fine petal, fluted petal and broad leaf. 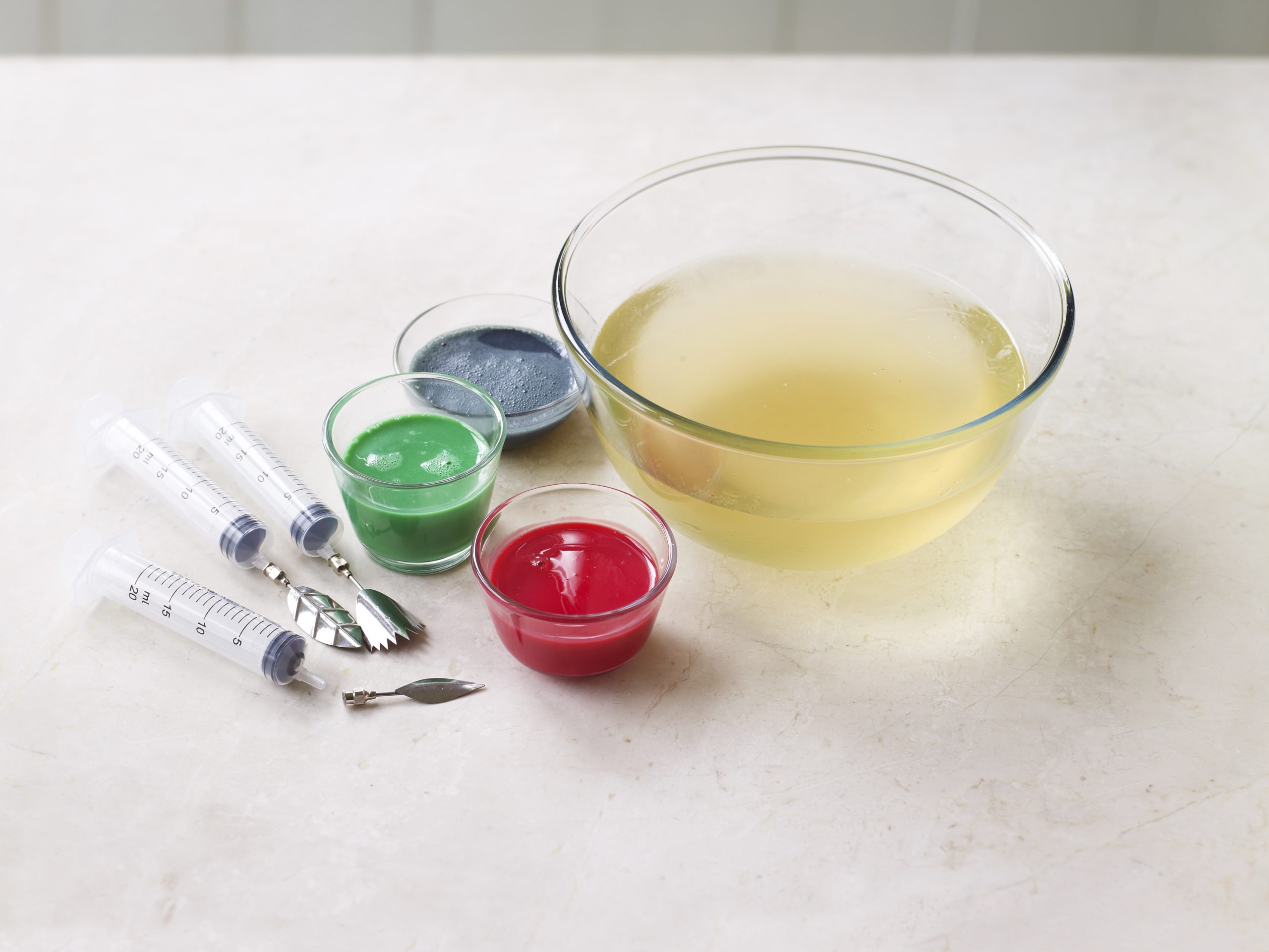 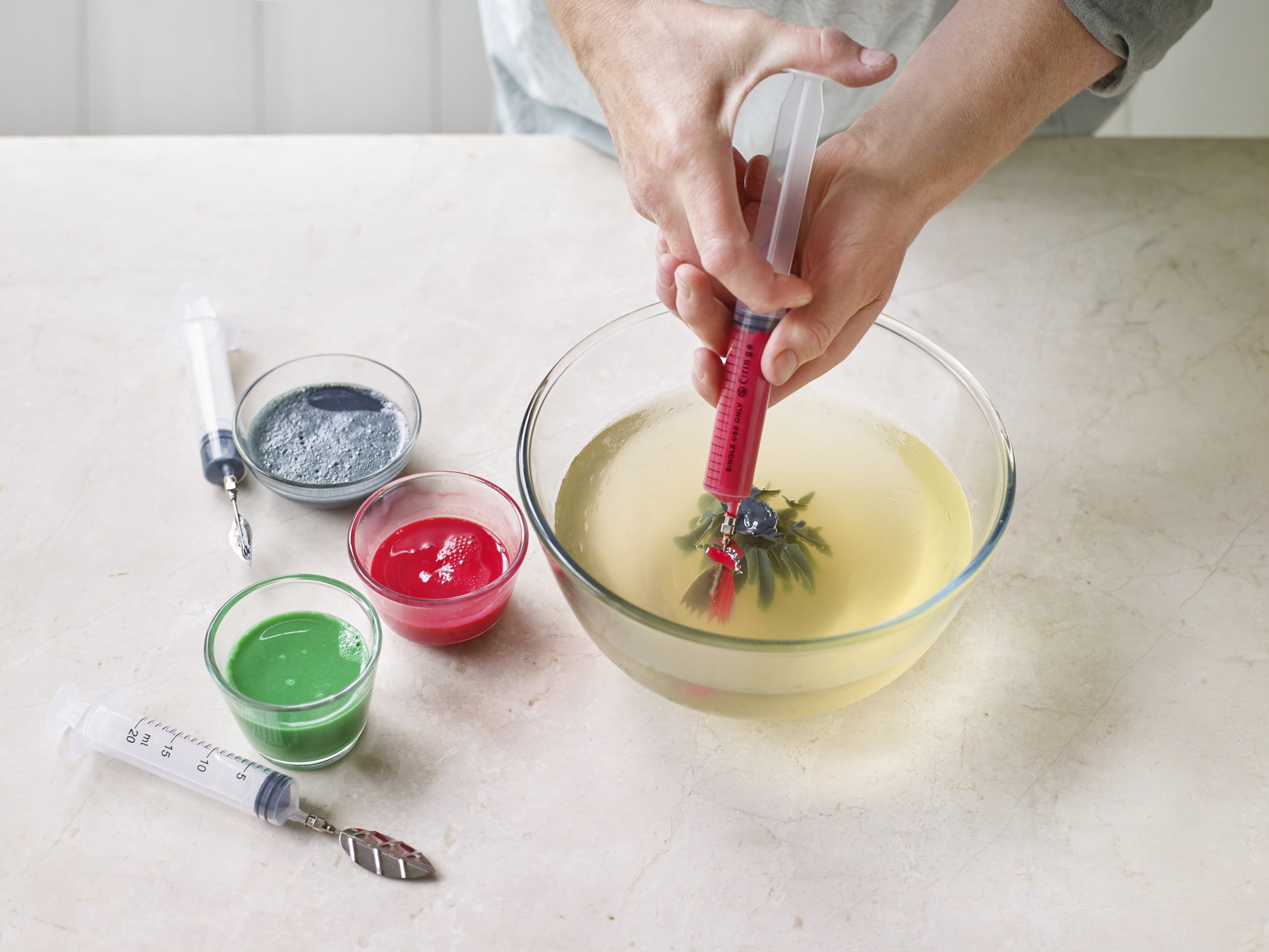 Step 15
Fill the second syringe with red jelly and attach the fluted petal needle. Push the needle into the jelly and inject red petals all around the fine black petals, depressing the syringe plunger and simultaneously pulling the needle out of the jelly. Turn the bowl around and mop up excess spills as you go. Pipe additional black dots in between the red petals. Turn the bowl over from time to time to check on your design. 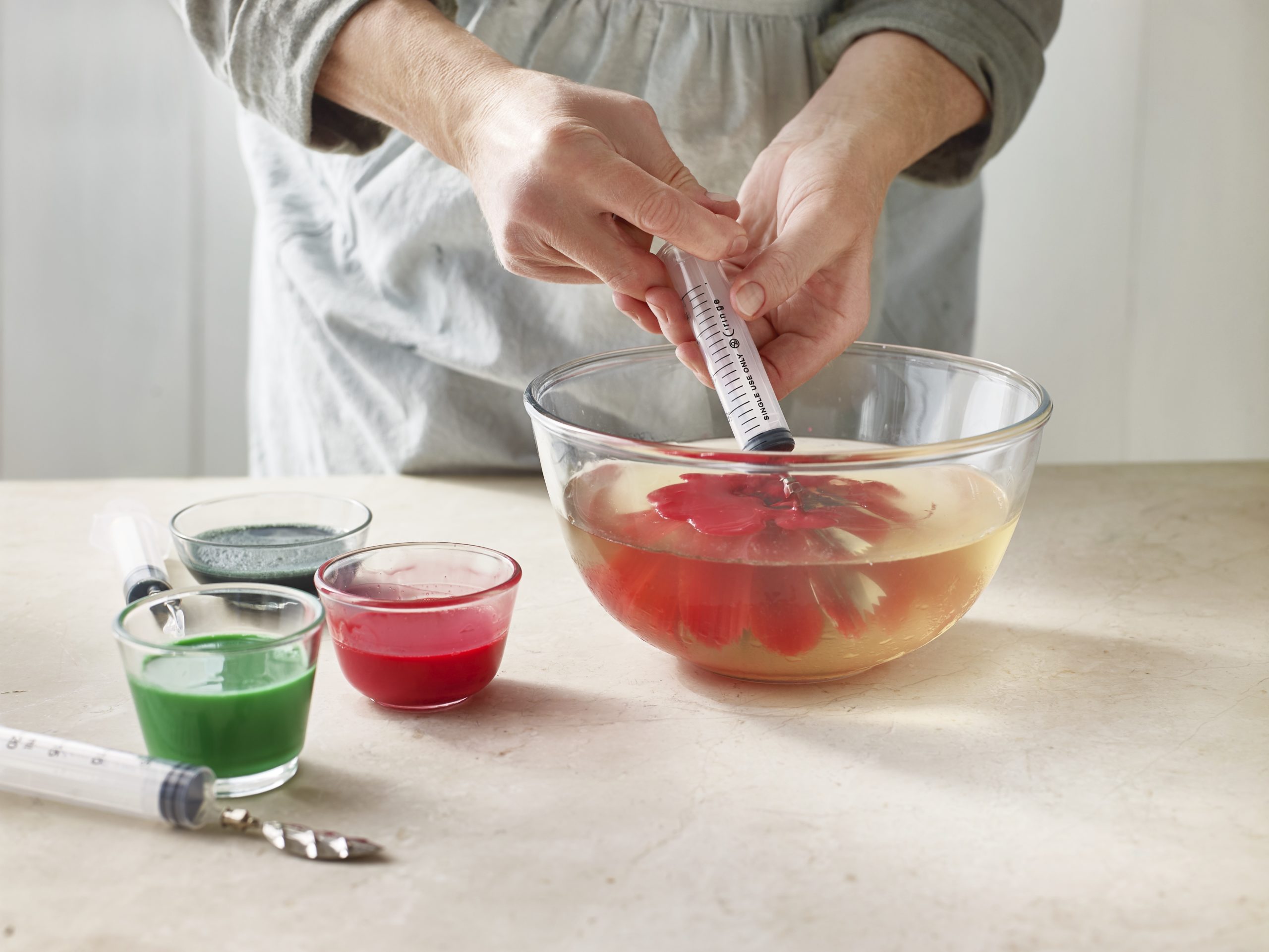 Step 16
Fill the third syringe with green jelly, attach the leaf needle and pipe a single or double layer of leaves around the red petals. Mop up any spills and return the jelly flower bowl to the fridge for at least 1 hour to set before turning out to serve. 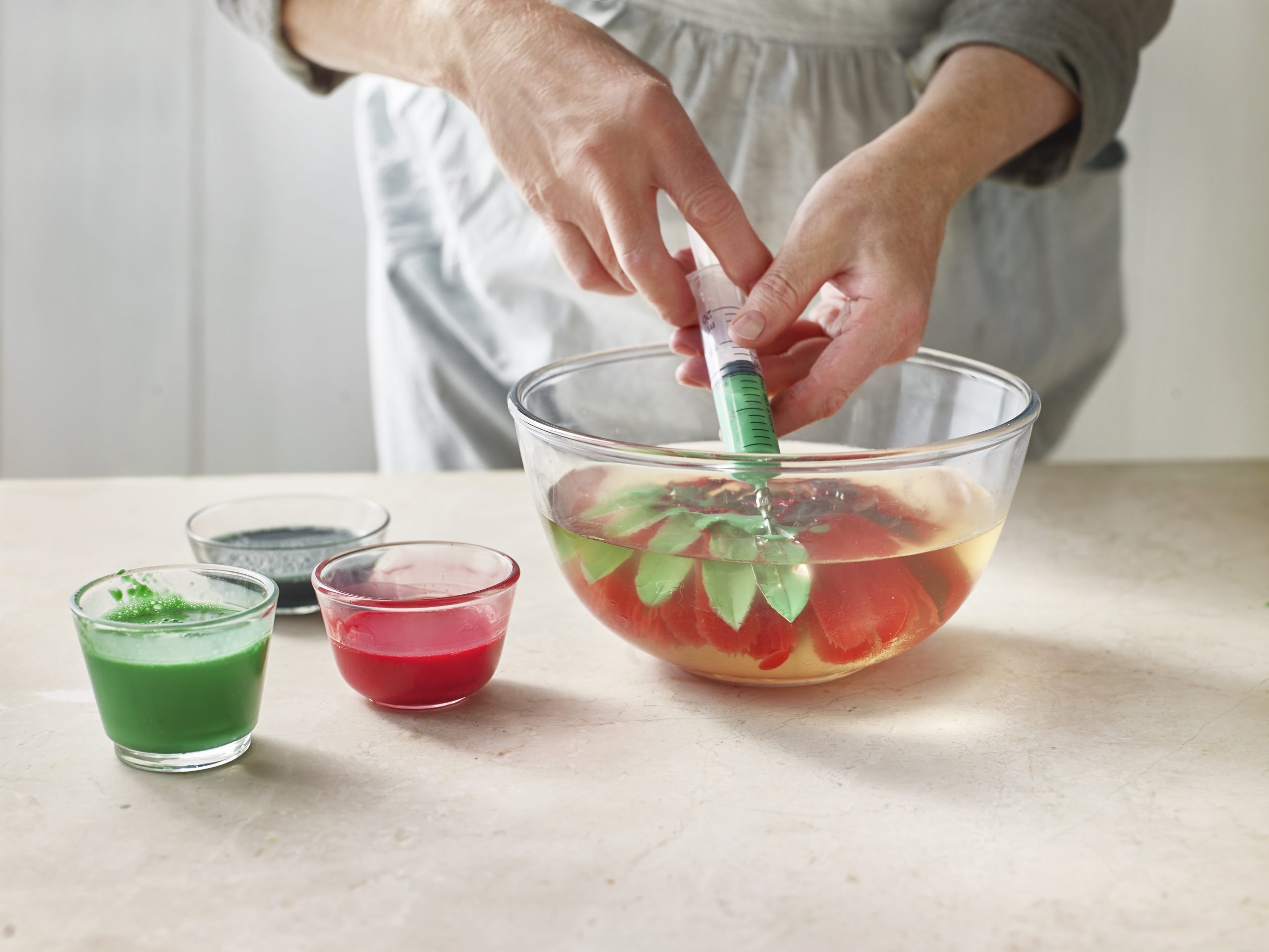 Step 17
Melt the dark chocolate in a microwave or a bowl set over a pan of simmering water and spread it evenly over the remaining acetate strip and cool until just set. To assemble, carefully unmould the cake from the tin, remove the acetate collar and place the cake onto a serving plate.

Step 19
Wrap the chocolate-coated acetate strip around the cake, chill for 5 minutes, then peel off the acetate. Whip the cream until it holds soft peaks, scoop into the piping bag fitted with the star nozzle and pipe around the bottom edge of the cake to serve.