These mini pork pies are fun to put together and are a good introduction to working with hot water crust pastry. Use the best ingredients so you can get the best flavour.

For the pork filling:

For the hot water crust pastry:

You will also need: 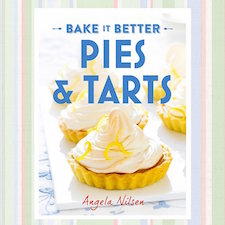 This is a recipe from Bake it Better: Pies and Tarts. For more like it, buy the book now.

Step 1
For the filling, roughly chop the pork and put it into a food-processor. Pulse briefly until it looks like coarse minced meat. Be careful not to over-process or it will become too smooth – you want to have a bit of texture. (Or you can chop it very finely with a sharp knife.) Transfer the pork to a bowl. Finely chop the streaky bacon, leaving the fat on to keep the filling moist. Add to the bowl along with the onion, sage, parsley, nutmeg, pepper and a little salt. Cover and chill until ready to use. It is good to have the filling all ready to go, as you want to deal with the pastry quite quickly once it is ready to roll out.

Step 2
Now make the pastry. Put the flour and salt into a large heatproof bowl. Tip the lard and butter into a small pan and pour in 150ml water. Heat this over a medium heat so the fats can melt, then raise the heat. As soon as it all comes to a boil, pour it into the flour. (Don’t let it simmer away or you will lose some volume.) Stir well with a wooden spoon until well mixed to form a soft dough. Leave it for a minute or two so the dough is a bit cooler to handle.

Step 3
Tip the dough onto a lightly floured surface and knead briefly until smooth. Wrap it in clingfilm and chill for 30–40 minutes. Try not to leave it much longer as this type of pastry can easily harden over time and become difficult to handle. It just wants to have cooled down a bit so it is easier to roll out.

Step 4
Lightly butter 6 small pudding moulds. Preheat your oven to 200°C/180°C fan/400°F/Gas 6. Divide the meat filling into six equal amounts. Cut the dough in half and keep one half wrapped while you shape the other half into a disc and roll out on a well-floured surface, to about 3mm thick. Using an upturned bowl or saucer as a cutting guide, cut out three 14cm circles for the base of each pie and three 8cm circles for the lids. Re-roll any pastry trimmings if needed so you can cut out all three lids.

Step 5
Line three of the small pudding moulds with the larger circles, pressing the pastry well against and up the sides, pressing and smoothing it with your fingers (you'll find this pastry quite pliable) so it evenly covers the inside of the moulds, smoothing out any thicker folds that have formed. It should reach just above the top of each mould.

Step 6
Spoon a portion of the filling into each pastry-lined mould and press it down so that it is well packed in. It should sit slightly below the top of each tin.

Step 7
Brush the pastry edges with egg and cover with the pastry lids, pressing them down onto the filling. Press the edges well together to seal, then flute them to decorate.

Step 8
Brush the pastry with beaten egg to glaze and make a hole in the middle of each lid with a skewer to create a small vent. Repeat with the remaining half of the pastry and filling so you have six pies.

Step 9
Sit the pies on a baking sheet and bake for 40–45 minutes until the pastry is a rich golden brown. Remove them from the oven and let them sit for about 30 minutes. While they're still warm, and in case any juices have bubbled over and stuck to the insides of the tins, loosen all around the edges of the pastry to make sure they can easily be released later. Leave the pies in their moulds for a couple more hours until completely cold and the juices have all gone back into the meat, before turning them out.