Create your own festive winter wonderland centrepiece with Kim Joy’s ‘Cosy by the Fire’ biscuit shadow box. Set an afternoon aside and get the whole family involved in baking and icing three types of delicious biscuits.

For the gingerbread biscuit:

For the lemon shortbread biscuit:

For the almond German biscuits:

For the royal icing:

4 piping bags, each fitted with a small writing nozzle

Step 2
Make the gingerbread. Cream the butter, sugars and treacle in the bowl of a stand mixer fitted with the beater attachment for about 3 minutes on medium speed, until combined but not aerated.

Step 3
Add the ginger, cinnamon, cloves, orange zest and flour, and mix to a breadcrumb consistency. Add the milk and mix to combine, then tip the mixture out of the bowl and bring it together with your hands. Knead it to a stiff dough.

Step 4
Divide the gingerbread mixture into 4 equal pieces. Roll each piece out on a sheet of baking paper to 5mm thick, then cut out the following:

From sheet 1: Cut out a square measuring 26 x 26cm to form the back wall, then using the 6cm round cutter, cut a circle to form the window above the fireplace. Using the fire template, cut out the fire shape below the window.

Re-roll the trimmings and using the 7cm snowflake cutter, cut out 2 snowflakes. Using the template cut out 2 fireplace sides and 1 fireplace top.

Step 8
Meanwhile, start making the lemon shortbread (if you only have 4 baking sheets, wait until the gingerbread biscuits are cooled and hardened). In the bowl of a stand mixer fitted with the beater attachment, cream the butter and sugar on medium speed for 3–5 minutes, until smooth. Add the lemon zest and beat again to combine.

Step 9
Add the flour and mix until just combined. The dough should be slightly sticky, but soft and easy to handle. Try to work the dough as little as possible – the more you mix it, the tougher it will be. Divide the mixture in half. On a lightly floured surface, roll one half of the shortbread out to a rectangle measuring 28 x 20cm to form the floor and place this on a baking sheet lined with baking paper. Sprinkle with flaked almonds.

Step 10
Roll the remaining shortbread out to a square measuring about 40 x 40cm and, using the templates, cut out 1 bear, 1 panda, 1 penguin, 2 Christmas trees, 1 large portrait and 1 small portrait.

Step 11
Using the 4cm round cutter, cut out a circle to form the base of the melted snowman. Using the 7cm snowflake cutter, cut out 3 or 4 snowflakes. Place the pieces on another baking sheet lined with baking paper.

Step 13
Make the almond German biscuits. In the bowl of a stand mixer fitted with the beater attachment, cream the butter and icing sugar until smooth, then add the vanilla paste and almond extract and beat to combine.

Step 14
Fold in the potato starch and the flour until combined. Turn out the dough onto a lightly floured surface and divide it in half. Colour one half blue and, using a rolling pin, roll it out until it is 1cm thick. Cut out a rectangle measuring 8 x 5cm to form the rug. Place this on a baking sheet lined with baking paper.

Step 15
Colour a walnut-sized piece of dough yellow and divide and shape it into 2–4 triangles of cheese. Place these on the baking sheet. Roll out the remaining dough to 5mm thick and using the 3cm round cutter, cut out a circle to form the pizza. Using the 2cm round cutter, cut out two circles to form the Victoria sandwich. Using the small snowflake cutters cut out 6 small snowflakes and press these into the top of the rug. Place all the pieces on a lined baking sheet and bake them for 10–12 minutes, until cooked through. Remove from the oven and leave to cool on the baking sheets.

Step 16
Make the royal icing. Whisk the egg white in a large bowl until frothy. Using a wooden spoon or a hand-held electric mixer on slow speed, add the icing sugar a tablespoonful at a time and beat the icing until it is very stiff and white and stands up in peaks.

Step 18
Make the caramel. Tip the caster sugar and 100ml of water into a small heavy-based saucepan and heat the mixture over a low heat until the sugar begins to melt, shaking the pan from time to time (do not stir). Bring the mixture to the boil, then cook the caramel to a light amber caramel colour (about 2–3 minutes). Meanwhile, prepare a bowl of ice-cold water. Carefully remove the pan from the heat and plunge the base into the cold water to stop the cooking process and prevent the caramel from burning.

Step 19
Use the caramel to stick the fireplace pieces around the fire, top and sides. Then stick the box sides to the back of the box. Stick the entire back and sides to the shortbread base, then stick the roof on top. Decorate the box roof and insides using the white icing so that you have icicles hanging from the top of the roof, and the appearance of decorations on the inside walls, around the round window and over the fireplace. Pipe a thin black cross over the round window in the back of the box to add detail. (Use the photograph as a guide.) 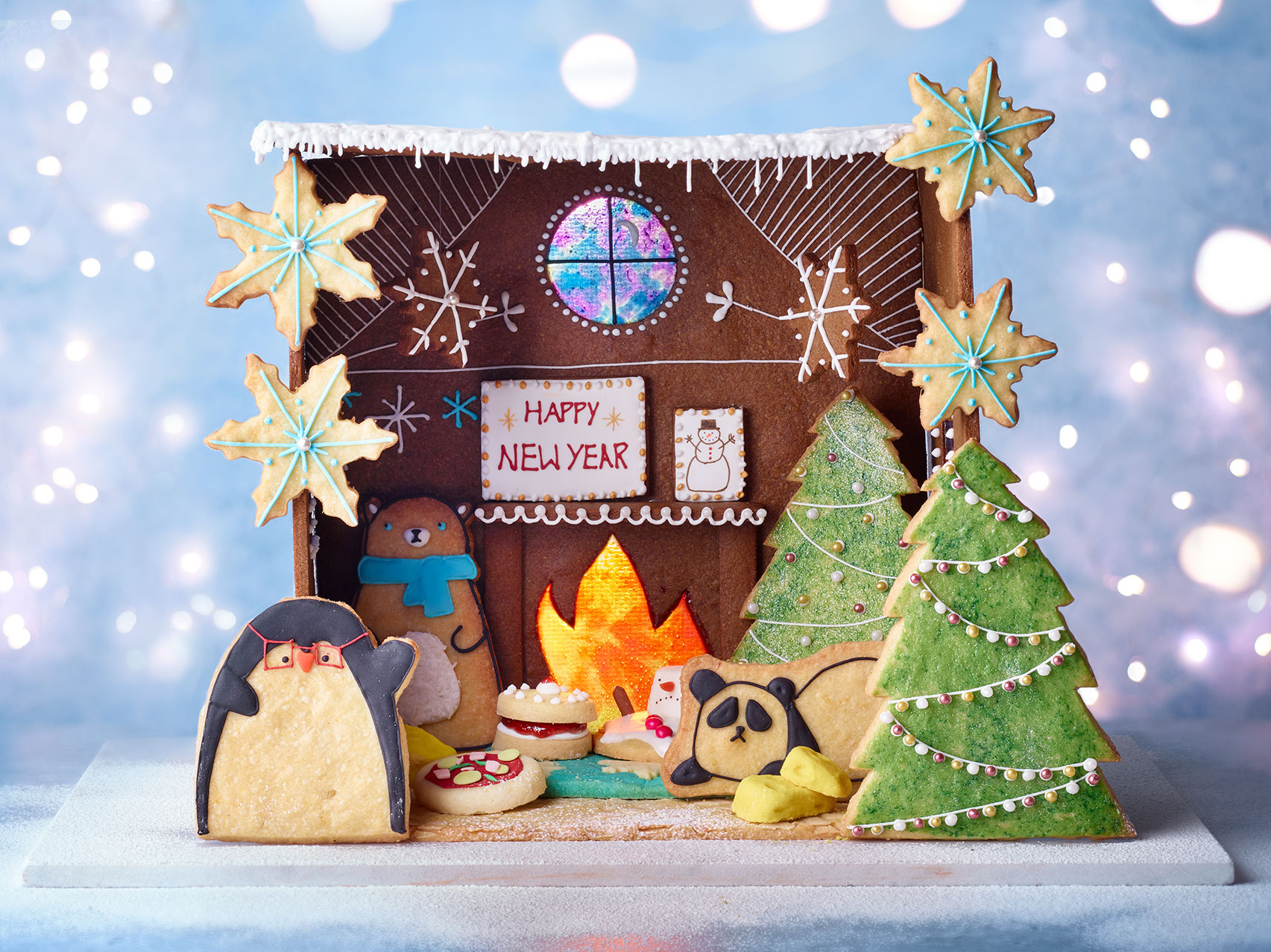 Step 20
To decorate the trees, dilute a little green food colouring with water, then paint the trees green. Leave these to dry for 5 minutes, then ice lines from side to side to form the strings of lights on the trees. Decorate these with white, gold and red dragees to look like lights and baubles. 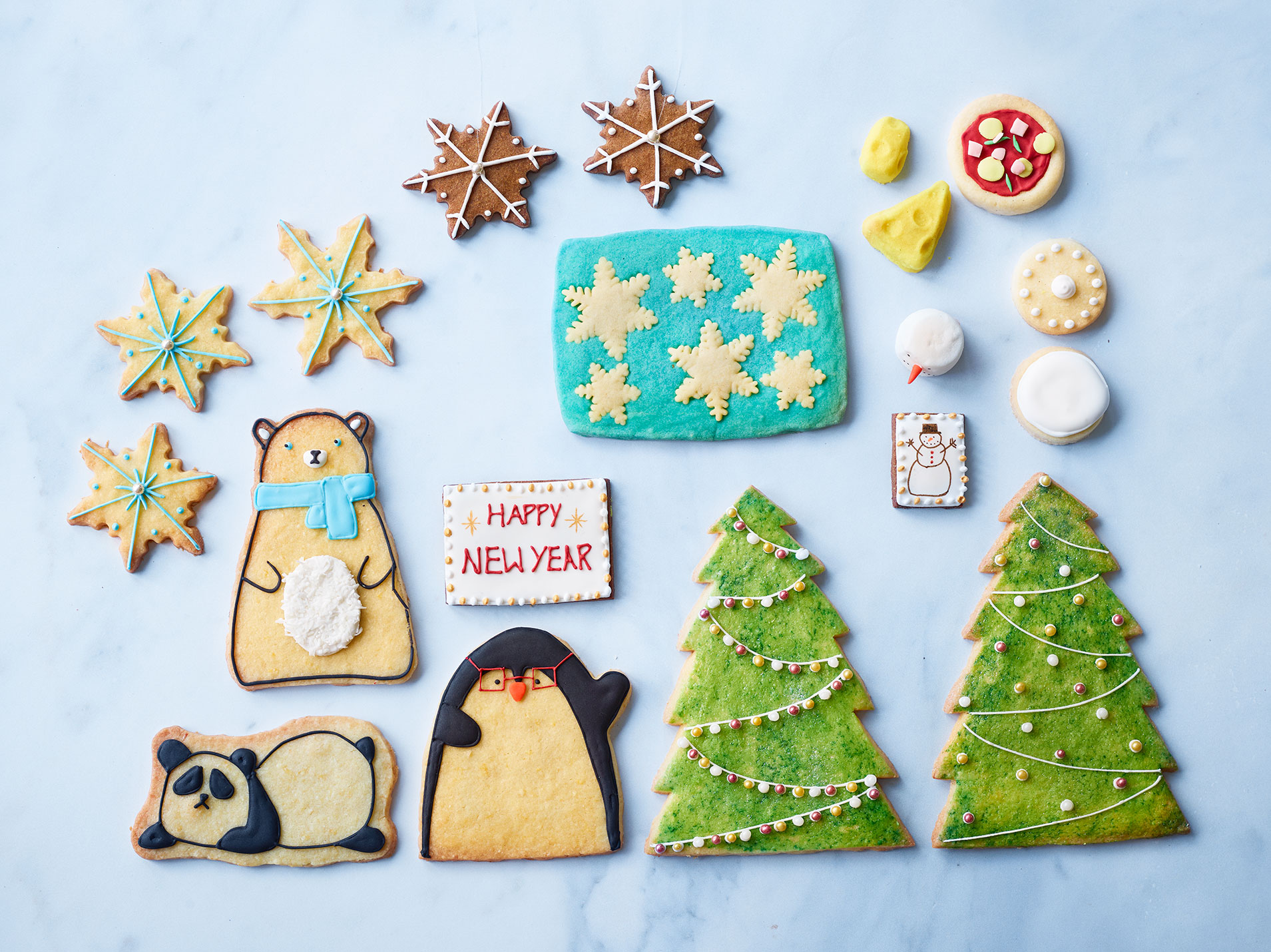 Step 22
To decorate the animals, use the black icing to pipe a panda on the biscuit, an outline around the bear and the penguin. Include little swoops for the bear’s arms. Leave to dry, then pipe red glasses on the penguin, and a blue scarf and a white tummy on the bear. Sprinkle the tummy with desiccated coconut to make it look fluffy. Pipe the black and white ears, eyes and nose on the bear and a red nose on the penguin.

Step 23
For the large portrait, ice the biscuit white and leave it to set, then pipe Happy New Year in red. Pipe small decorative dots around the edge and leave these to set. Once the icing is dry, paint each alternate dot gold and draw 2 small gold stars either side of the word ‘Happy’.

Step 24
For the small portrait, ice the biscuit white and leave it to set, then draw a snowman on the icing with edible pen. Using the red icing, pipe a nose and 3 buttons on the front of the snowman. Pipe small decorative dots around the edge and leave the icing to set. Once the icing is dry, paint each alternate dot gold.

Step 25
For the melted snowman, paint a face on the side of a marshmallow and using the orange fondant make a nose and glue it on using edible glue. Pipe a large puddle of icing onto the 6cm shortbread biscuit, then place the snowman head on top. Arrange the red chocolate dots to look like buttons on the icing.

Step 26
For the Victoria sandwich, pipe a circle of white icing onto one of the 2cm shortbread biscuits and leave the icing to set. Pipe white dots to resemble swirls of cream on the other biscuit, then leave to set. Once set, sandwich the biscuits together with the raspberry jam.

Step 27
For the pizza, using the coloured fondant, make a round red tomato base, yellow pieces of cheese, pink pieces of ham and green strips of pepper.

Step 28
Leave all the biscuits to set before gently reheating the caramel in the pan and sticking the biscuits in place inside the house.