Liam’s illusion masterpiece was a real highlight of Series 8 and would make a fantastic celebration showstopper for someone whose love of blueberry breakfast pancakes is equalled only by a love of delicious cake.

For the granola crumble:

For the Swiss meringue buttercream:

For the blueberry compote:

For the fondant pancakes:

15cm round cake tins x 3, greased, then lined (base and sides) with baking paper 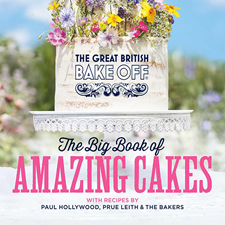 This is a recipe taken from The Great British Bake Off: The Big Book of Amazing Cakes.

Step 1
To make the granola crumble, tip the 150g pecans into a food processor and blitz to a large crumb. Tip the flour into a separate bowl, add the blitzed pecans along with the porridge oats, wheat germ, salt, butter and both sugars. Rub the butter in with your fingertips, until you have large chunks of crumble. Tip out onto the lined baking tray and set aside.

Step 2
Heat the oven to 180°C/160°C fan/350°F/Gas 4. To make the sponge, tip the buttermilk, vanilla and banana into a food processor and blitz until smooth. In a separate bowl, sift the flour, bicarbonate of soda, nutmeg, cinnamon and salt together.

Step 3
Cream the butter and sugar together in a stand mixer fitted with the beater, on high speed for 4–5 minutes, until pale and creamy. Add the eggs, little by little, beating well between each addition. If the mixture begins to split, add a tablespoon of the flour mixture and beat again.

Step 4
With the mixer on a low speed, add the buttermilk mixture and the flour mixture, one third at a time, beating well between each addition, until combined. Divide equally between the three prepared tins and smooth with a palette knife.

Step 5
Bake the sponges and crumble mixture for 25–30 minutes, until a skewer inserted into the centre of each sponge comes out clean and the crumble is deep golden brown. Remove from the oven and leave the sponges to cool in the tins for 15 minutes, then transfer to a wire rack to cool completely.

Step 6
Leave the crumble to cool, then tip it into a food processor and pulse to large crumb. Stir in the raisins and the extra 50g of pecans and set aside.

Step 7
To make the Swiss meringue buttercream, using an electric hand whisk, whisk the egg whites and sugar together in a bowl set over a pan of gently simmering water, until the sugar has dissolved. The egg whites should feel smooth, not gritty.

Step 8
Transfer the hot mixture to the bowl of a stand mixer fitted with a whisk and whisk on medium–high speed to a stiff meringue, then continue whisking until the bowl is completely cool to the touch. Add the butter, little by little, beating continuously to a smooth, fluffy icing. Whisk in the vanilla and honey, then set aside.

Step 10
To make the fondant for the pancakes, melt the marshmallows with 2½ tablespoons of water and a small amount of cream food colouring in a large bowl set over a pan of simmering water, stirring continuously.

Step 11
Remove from the heat and, using a wooden spoon, stir in the icing sugar, one quarter at a time, mixing well between each addition, until firm. On a surface greased with vegetable fat, knead the fondant into a ball, then wrap it in cling film and set aside.

Step 14
Use the remaining third of the buttercream to cover the top and sides of the cake. Smooth off the excess buttercream with a palette knife to create a crumb coat. Chill for 1 hour, until firm.

Step 15
Divide the fondant into 12 pieces. On a surface lightly dusted with cornflour, roll ten of the pieces into thin sausages, long enough to wrap around the cake. (Use a piece of string to measure the circumference of the cake and use it as guide when rolling the fondant lengths, if you like.)

Step 16
Wrap one of the fondant lengths around the base of the cake, sticking it together at the ends with edible glue and pinching the join together. Repeat with the remaining nine lengths of fondant until you have ten rolls of fondant around the cake, stacked one on top of the other, resembling a stack of pancakes.

Step 17
Knead the remaining two pieces of fondant together and roll them out to a circle large enough to cover the top of the cake – this is going to be the ‘pancake’ that tops the stack. Place the circle on top the cake.

Step 18
Combine equal quantities of cream and egg-yellow food colouring and dilute them with 5 tablespoons of vodka (start with small amounts, then add until you get your desired shade – you want it quite a light, cooked-pancake colour at this point). Paint the pancake ‘stack’ with the colouring.

Step 19
Combine equal quantities of cream, egg-yellow and brown food colouring and dilute the mixture with the remaining 2 tablespoons of vodka, then paint the edges of pancakes to add darker detail, as desired.

Step 20
Spoon the whipped cream over the top of the cake to represent the pancake topping, then sprinkle over another good helping of the crumble and one third of the compote. Dust with icing sugar before serving. (Any leftover granola crumble will keep in an airtight container in the fridge for up to 1 week and is delicious sprinkled over yoghurt or ice cream.)

Flo’s ‘One in a Melon’ Cake

difficulty 1 hr 30 mins
This site uses cookies to offer you the best possible experience on our website. By continuing to use our website you agree to our use of cookies.
To find out more or to opt out, please read our Cookies Policy.OK